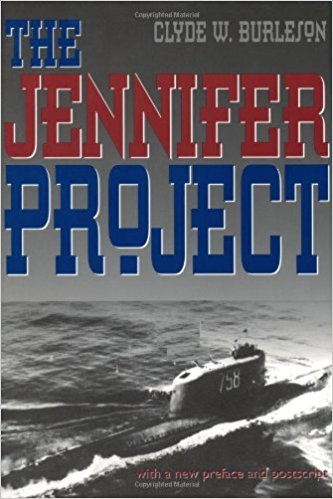 The true story of the greatest U.S. intelligence operation in history!

In 1974 a Soviet G-class submarine mysteriously explodes and sinks to the bottom of the Pacific. With Cold War secrecy and speed, U.S. military intelligence races to find a way to raise the sub, which has lodged in primordial muck three miles below the ocean's surface. Code named "Jennifer," the retrieval project brings together top military brass, the CIA, and Howard Hughes in one of the most remarkable episodes of high-tech intelligence gathering during the Cold War.

Shrouded in supersecrecy, fronted by Hughes, and designed by Global Marine under contract with the CIA, the Hughes Glomar Explorer was a technological marvel. Two football fields in length and twenty-three stories high, it held in its hull a six-million-pound submersible "claw" for picking up sections of the submarine. The project cost the U.S. government hundreds of millions of dollars, but the intelligence community was betting that, if successful, reclamation of the Soviet submarine would furnish invaluable military knowledge as the two superpowers neared negotiations in the Strategic Arms Limitation Treaty talks.

Popularly and critically acclaimed when first published in 1977 by Prentice-Hall, Clyde W. Burleson's true Cold War tale of high-tech espionage, money, power, and politics, was reprinted in 1997 by Texas A&M University Press with a new preface and postscript.

This Prentice-Hall best seller received a highly favorable, full-page, illustrated feature review in THE NEW YORK TIMES BOOK REVIEW and the author completed a four-week nationwide media tour which included an interview on the TODAY SHOW.

THE JENNIFER PROJECT is the subject of a Discovery Channel special, A MATTER OF NATIONAL SECURITY, as part of a series of true stories focusing on spies, espionage, and the intelligence operations of the U.S. government. The author served as on-air talent, consultant to the producer, and assisted with the story for this pilot program.

The Hughes Glomar Explorer, which recovered the Russian submarine, was featured in the History Channel's GREAT SHIPS series.

THREE MILES DOWN, a major motion picture about THE JENNIFER PROJECT, is currently in development.